The Golden Knight Battalion is made up of Cadets from all four of the schools in the North Country (Clarkson, St Lawrence, SUNY Potsdam, and SUNY Canton). Each of the schools adds something special to the mix. Although they all bring unique qualities to the Battalion they all become part of the Battalion quickly. The mix was a good one again this year.  Of note was the fact that all three of the commissionees at SUNY Potsdam was a member of the National Guard or Army Reserves.

This was also the last year that Dr. Schwaller, the President at SUNY Potsdam will participate in our ceremony.  Each year he made it a point to mention that his first official duty when he arrived at SUNY Potsdam was to be part of an Army ROTC commissioning ceremony.  We wish him well as he leave SUNY Potsdam this summer.

So without further adieu, our Commissionees for the Class of 2013 from St Lawrence and State University of New York at Potsdam.

Lieutenant Diagostino is being commissioned into the Corps of Engineers.  He received a bachelor of arts degree in mathematics from State University of New York at Potsdam.  He will attend the Engineer Officer basic course at Fort Leonard Wood, Missouri and will serve in the Army Reserves with the 366th MAC Engineer Company here in the North Country.  He also scored the first goal in the hockey game against Air Force this year.

Lieutenant O’Brien is being commissioned into the Quartermaster Corps.  He received a bachelor of science degree in business administration from State University of New York at Potsdam.  He will serve at the Leadership Development and Assessment Course at Fort Lewis, Washington this summer prior to attending the Quartermaster Officer basic course at Fort Lee, Virginia.  His first duty will be at Fort Bragg, North Carolina, with the 82nd Airborne Division.

Lieutenant Robishaw is being commissioned into the Transportation Corps.  He received bachelor of arts degrees in criminal justice and sociology from State University of New York at Potsdam.  After graduation he will attend the Transportation Officer basic course in Fort Lee, Virginia.  His first duty assignment will be at Fort Campbell, Kentucky with the 101st Combat Support Command. 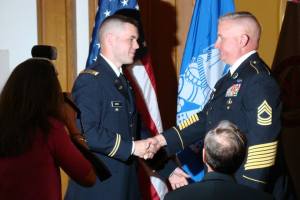 Lieutenant Empey is being commissioned into the Chemical Corps.  He received a bachelor of arts degree from St Lawrencein history.  He will serve this summer at the Leadership Development and Assessment Course at Fort Lewis, Washington prior to attending the Chemical  Officer basic course at Fort Leonard Wood, Missouri.  His first duty assignment will be Fort Hood, Texas with the 1ST Cavalry Division.

We are now almost “Mission Complete” on the class of 2013. We do have three Cadets who are finishing up course work and plan to earn their degree and commission before the end of the semester.  These three will allow us to exceed our commission mission again this year.   Not bad for a small school from the real upstate New York.