Today we woke up at 0500 (5am) and given about 5 minutes to pack up our rucks and prepare for morning formation. While Steve Strait and I were ready in a matter of seconds, the rest of our squad was a little sluggish to wake up, probably a result of their respective 5 hour bus ride they had each taken the previous day in order to get to Potsdam, and so we helped them get all their stuff together as best we could and head down to formation. Once in formation outside of Old Snell at roughly 0515 we were told to fall out by squad to get breakfast (unfortunately, while the food looked good, I could only eat ½ of it because it was Friday, meaning no meat). After 30 minutes of eating/ standing around waiting for orders, we were told to “ruck-up”, as Bravo Company would be doing FLRC and Land Navigation today, while Alpha Company did STX lanes. Enviously we watched Alpha Company get onto busses to head out to 7-Springs, while we proceeded to begin marching towards the “back 40” where we would conduct FLRC. On our way to the “back 40” we passed the big sign at North Country Saving’s bank which displays the time and temperature, and it read 0c. One of the Niagara cadets groaned saying something to the effect of how cold it was, and I couldn’t help but think that it was basically t-shirt and shorts weather in Potsdam (I guess it’s relative). Marching in a column all the way through the campus of Clarkson we arrived at the back 40 in all its glory and were broken off by squad and told where to go. We were first assigned to a “tank trap” (it’s a giant red trapezoid in the woods).

The squad leader was tasked with having to get a 50 gallon drum and the entire squad over the “tank trap” without touching any of the red, as that would set off the anti-tank mines. Our squad leader chose to have one squad member act as a stepping stool (myself) while another would step on his back and aided by two other cadets giving him a boost. Hoisting himself up to the top of the trap, he fastened the given rope to the top so to facilitate the passage across the trap. After another cadet went to the top of trap, the squad leader ordered us to lift up the 50 gallon drum to the two cadets at the top of the trap and then brought down to the other side by one of those two cadets. After getting all of the other cadets over the trap only Strait and I were left. A born leader, Strait told me to go first and then he single-handedly climbed over the trap using only the rope. Finishing the task well within the time constraints we then called up to higher (T16, an MSIV standing by watching the entire mission) confirming that we had finished. We then conducted an AAR which is basically a meeting of the MSIV and the squad about how the mission went. We did this well into the afternoon, defeating mission after mission, ranging from bringing a wounded pilot across a river to safety, to only being able to get across an obstacle using only 2X4’s of various lengths.

Following FLRC was land navigation which was conducted over the course of 6 hours at Stone Valley (a wood’s area near the local power substation). Armed with nothing more than an assault pack full of MRE’s, beef jerky, a map, and a compass, cadets of Bravo Company were to head out and find all of their points in the woods using terrain association (hill on map = hill I’m standing on, ergo I know where I am) and your “pace count.” A Pace count is how many steps you walk per 100 meters, since mine is 62, if I have to go at 320° for 300 m, I’ll walk 186 steps to get there. After 4 hours most of the Clarkson cadets had returned along with a few cadets of each of the schools. Waiting for the other cadets to return most people ate and tried to recuperate from their long and strenuous day. When all of the cadets from each school returned (2000 H) we formed up and were told that we’re be going out again to do night land navigation. Needless to say this was a little more difficult than the day land navigation, we were given fewer points to find (5 as opposed to 8), and needing only 3 to meet the standard as opposed to the 5 needed during day land navigation. Like an idiot, I plotted all of my points and then did a direct route from each point to the other starting with the furthest one first. Two minutes after entering the dense wooden terrain, I was lost. Trying to find out where the hell I was with my little red laser pointed I was equipped with was a nightmare, looking down at the map I tried employing several techniques of finding out where I was. Method 1: terrain association, this is a little easier to do when you can see the terrain. I shook the tree next to me and then looked down on the map to see if I could see the tree shaking but alas it was too dark to tell (A little Army humor). Finally, by the grace of God I happened on a check point that was not too far away from where I was supposed to be. Following an adjacent path I used my pace count to get to where I should be on the trail, and then I turned back into the woods. I spent the next hour circling the area my point was supposed to be according to what I had on my map, but to no avail. After an hour a group of people headed by and I decided that if I ever wanted to get out of the woods I should probably just follow them. As luck should have it they were searching for the same point I was so we decided to look together. After tirelessly trudging along another 30 minutes in darkness, we found nothing. Frustrated and defeated we decided to take a short break before hitting the woods again for another go. We weren’t sitting on ground for more than 5 minutes when an MSIII came barreling out of the woods, noticed us, and stopped to ask what we were doing. When we explained to him that we were basically as helpless as a blind sheep lost in the woods surrounded by ravenous wolves, he offered to help. I’m not going to say that he may have had an unfair advantage with his brilliantly bright LED head light, but he already had 4 points of the five and none of us had any, so we followed him. This turned out to be a lot more difficult than expected because just as he had come out of the woods he went back into, with a purpose. Trying to keep up while falling over every downed tree in the forest, our future Ranger guide used his own running pace count while simultaneously finding the direction with his compass. It was intense. All the while he was shouting out helpful techniques to employ when looking for points in the dark (btw a point is a square orange and white box flag hanging from a tree) like point your light at the ground so you can see the orange points better because with the red light you can barely see them. Within 5 minutes of meeting this wilderness dynamo we had found our point, it was on the other side of the trail that we had been searching on for the last hour and a half. Armed with this point I now only needed two more to pass and luckily for me further down the dark trail was a checkpoint. On each side of this check point was a point and so the quest continued! When I got to the point I first went off into the woods and surprisingly almost exactly where I had plotted the point, I found it. When I returned to the checkpoint to go the other way all the adrenaline and motivation I had accrued from finding my 1st point was wearing off, so I employed the oldest and probably most popular way of finding my last point, I waited, listened for voices, and ran toward them. Like clockwork I came onto a group for shivering MSII’s huddled around the point I was trying to find like it was a fire. Following this great victory I headed out with one of the MSII’s
(Patrick McPartland, future business major from Huntington, New York) 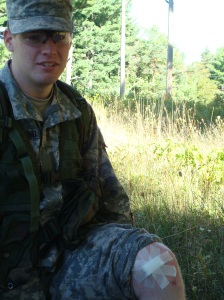 who was nursing a hurt foot and a broken spirit along with 2 points of the 5. Upon returning, turned in our points to be graded and then headed out to wait, in formation, in the freezing cold, for the next two hours while we waited for several of the MSI’s who had gotten lost to return. We then ruck marched down a trail for about ½ a mile to a field of thorns. Finally at 0200 the next day, 3 hours before we were to wake up again for the next day, I laid my sleeping mat down in the softest pricker bush I could find and fell into a deep sleep, thanking God that I was where I was.