The career of an ROTC Cadet is filled with a variety of opportunities and experiences. Many of these experiences can be very meaningful. Some can be unforgettable. 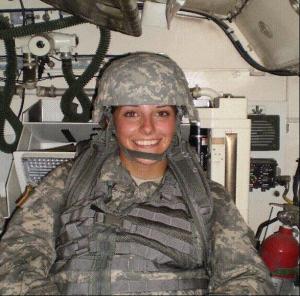 Cadet Lorin Smith, a GKB Senior had one of these unforgettable experiences last summer at Fort Sam Houston in Texas. She participated in a Cadet Troop Leadership Training (CTLT) program where she was able to work alongside working troops and get valuable leadership experience early on.

During her CTLT tour, Lorin worked directly beside a Medical Service Lieutenant in a Combat Medic Training Battalion. They practiced field training and setting up emergency aid stations.

One of the most significant experiences of her tour was when she had the chance to tour Brooke Army Medical Center, one of the Army’s premiere hospitals and host to the top-rated burn unit in the United States. As an aspiring Medical Service Officer, Lorin was excited to see the place that represented the leading edge in her chosen career field.

She was very moved by what she saw at The Center for the Intrepid (CFI), a rehabilitation center for wounded Soldiers either with amputations or severe burns. Although the CFI is located at Brooke Army Medical Center, it was privately funded with over 600,000 private donations via the Intrepid Fallen Heroes Fund. At the center, “wounded warriors” learn how to live ordinary lives in apartments that can be tailored to accommodate their injuries or disabilities.

Cadet Smith aspires to attend graduate school to become a professional counselor after she commissions as a Medical Service Lieutenant. During her CTLT tour and her tour of The Center for the Intrepid she felt like she was looking directly into the future of her career.

Lorin says she is very grateful for the opportunity that ROTC has provided her in fulfilling her lifelong career goals.