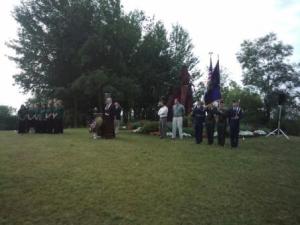 Every year it is a moving ceremony in which College President Tony Collins, someone from Alumni relations, and a guest speaker reflect on 911. This years ceremony featured former marine and current Clarkson University student Christopher Krushinski, who is attending Clarkson using the GI bill and the Yellow Ribbon program, and Rajiv Narula, PhD student in Environmental Sciences and Engineering, who will recite the Sanskrit Universal Prayer for Peace. Additionally the ROTC programs at Clarkson provide a joint color guard, and the Golden Knotes, the accapella singing group at Clarkson sing the National Anthem and “America the Beautiful. The location for the ceremony is the September 11 Memorial Sculpture on Clarkson’s campus. This sculpture, which was created with steel girders from the world trade center. 4 Clarkson alumni were among the victims of the 911 attacks.

Here is coverage from the 2008 ceremony

As I observed today’s ceremony I reflected on where I was, and what I recall from that fateful day 9 years ago. At the time I was working for US Steel, as a foreman in their steel mill. I had left the Army in 1996 and never dreamed that I would be part of the military again in my life. I was working the 3 to 11 shift that day, and was taking the opportunity to get my grass cut that morning. I had gone into the house to get a drink of water and saw that a plane had crashed into one of the twin towers. As I watched the news coverage of what appeared to be a tragic accident I saw the second plane hit the other tower and new immediately that this was no accident. I recall one of my first thought being how could someone’s life be so desperate that they could perpetrate such an attack. How could someone perceive us as such a threat or enemy that they would do this to innocent civilians. When I went to work that afternoon all my coworkers, who knew I was a veteran, asked me about my opinion, and what I thought the response would be, and would I have to go if called. I told them I would have to answer the call, not realizing that a short time later I would be called to back to service.

I just wanted to share some reflection, since the events of 911 impacted me, and still impact me to this day because of where I work, and what I do and have done in the years since that day.