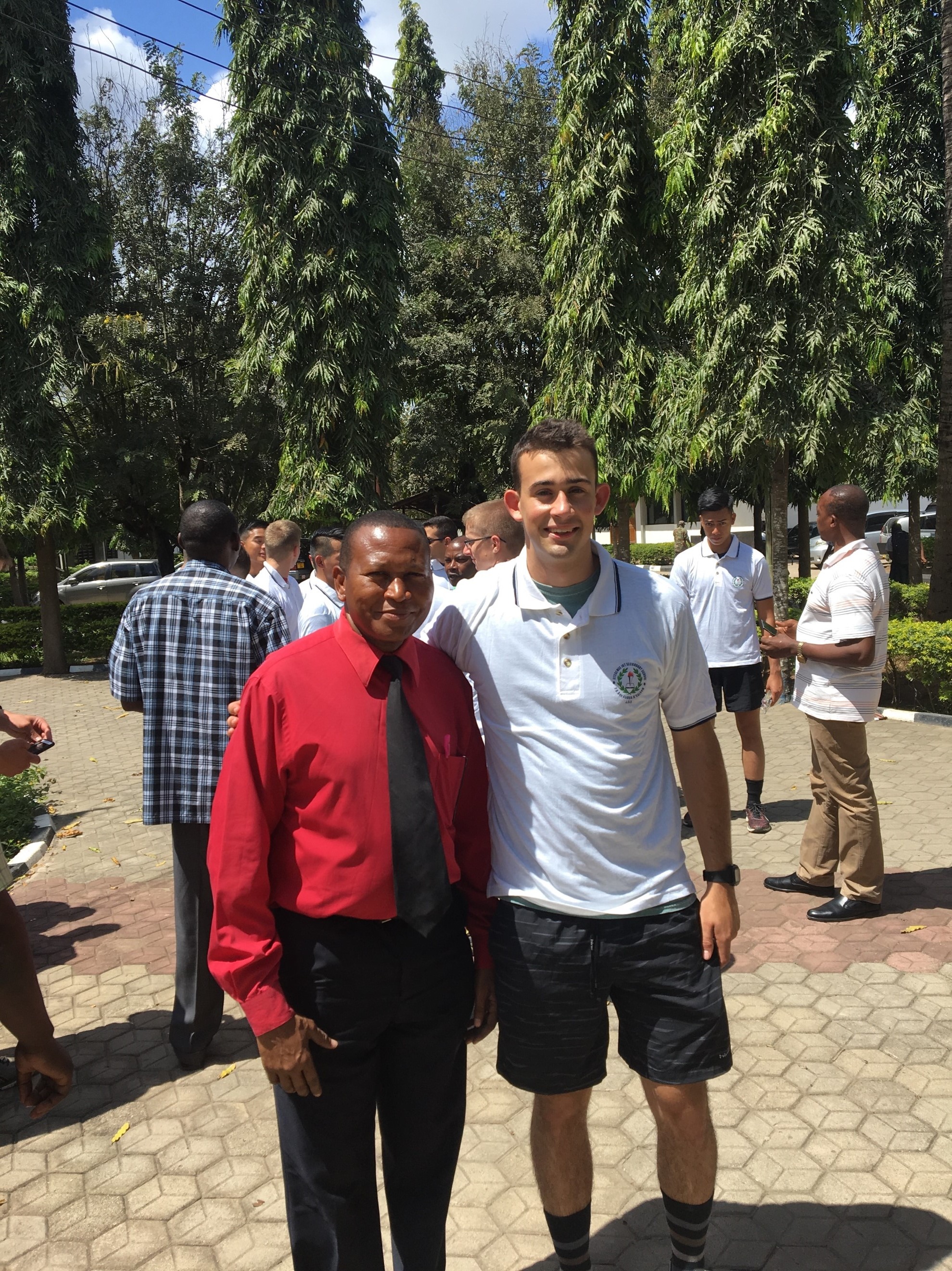 I thought I’d finish out the week with another CULP post.  We had two Cadets journey to Tanzania this Summer.  Here is the second report from the African country.

It all started at Fort Knox, the place of all beginnings I suppose. There I became acquainted with the team I would be working with for the next three weeks, and we were briefed for three days about the country we were going to. On July 17th we left for Tanzania with nine cadets, and on August 7th we came back to Louisville Kentucky with nine cadets (although there were a few slight illnesses along the way).

The purpose of our mission was to interact with the people of Tanzania and to build rapport with them. We wanted to give them a feel of what America was like, how our culture worked, and to answer any questions they had. We were there to teach, but also to learn as much as we could from them, and their culture.

My team had nine people on it and we all worked together to succeed in our goal. Our main area of work was at a secondary school in one of the biggest cities in Tanzania, Dar es Salaam. Dar es Salaam was an absolutely massive establishment with over five million people in it. While the population may have been indicative of a massive city, it was more sprawling than anything with only a few tall buildings that could not have even been called skyscrapers.

The city was bustling all of the time. Since there is no penalty against soliciting on the side of the roads, there was always someone trying to sell something. Roadside salesman sold things as simple as oranges and newspapers, to computers and cellphones. Bumpy, and in some places gaping, roads were surrounded by dusty footpaths which were heavily traversed by the average man who would rather waive the bus fee or a take a bike to work (which in some cases might be faster). While the government may have bypassed attention to the road system they had a large public transportation system that was composed mainly of buses, which often packed the road.

The trip to Jitegemee Secondary school in the morning was about ten miles, but could take anywhere from an hour, to an hour and a half to get there. Traffic was bad, but it was a great time to gaze out the window and take everything in. Jitegemee is one of the best schools in the nation and has about 2000 students, all of which are highly challenged, and very intelligent. The school is mainly for families of the military, so military life was integrated into the school life.

About 50% of the teachers were former or current military members. The headmaster was a captain in the Tanzanian Peoples Defense Force, and there were about 100 cadets running about the school keeping order. The school was similar to an American high school. Many of the students boarded at the school, and the ones I talked to liked it, they had a sense of order and discipline in their lives. The grade setup is also different. There are O level and A level courses, each with different forms or grades. O level (ordinary level) was constituted of forms 1-4, and A level (advanced level) courses were offered in forms 4-6. Students ranged anywhere from fifteen to twenty-five years of age.

We were not told much about what we were doing at the school and the first day we were given a classroom full of kids, and instructed to teach them. Split into groups of three cadets, the task was not as daunting as it could have been but it was still difficult. The students did speak English, but it was limited in forms 1-4, so we had to break a culture and language barrier in order to teach them. Many icebreakers, jokes, and us dancing or singing usually did the trick to ease students. Once the students were warmed up they began to ask questions about America that they were curious about.

The most common questions were: “Will I get shot in America since I am black?”, “What are the differences between Tanzania and America that you see?”, “Do you have a wife?”, “How can I get to America?” and “Are you afraid of North Korea?”. It seemed once I answered one question, ten more would pop up. Of course we had questions for them too which they were equally excited to answer. I became quick friends with many of the students and this continued for the three weeks we worked at the school.

Our main place of work was at the school, but we took a few excursions to see the country. Our biggest one was a trip to Mikumi National Park. We drove all over the national park and saw many types of animals. A nine-hour drive to go the 200 miles to Mikumi really demonstrated the weak infrastructure and poor roads of the country. In addition to the big weekend trip, we also took afternoon trips nearly every day after we were done teaching to learn more about the city. These afternoon trips included visits to the University of Dar es Salaam, various markets, talking to native tribesmen, and various cultural presentations.

While we were not fully immersed into the Tanzanian culture, we experienced a lot of it over the twenty-two days we were in country. I learned the most about the Tanzanian education system, how it works, the quality of its students, and the style in which they are taught. I learned to challenge my assumptions, and ditch the stereotypes I came into the country with. Lastly I will never forget the kindness of the Tanzanian people, and their welcoming nature.

Great rundown of a once in a lifetime opportunity.  Always love hearing about the adventures our Cadets have on their CULP trips.