We recently receieved a letter from Major George Rollinson, a 1999 SUNY Potsdam and GKB alum.

He has been deployed in Kandahar, Afghanistan and thanked Shirley after receiving a SUNY Potsdam pennant and a Golden Knight Battalion coin.

He begins his message by relaying a few coincidental run-ins with other GKB alumni who are also deployed in Afghanistan.

I finally mailed the pics.  Not sure how you can use them though.  You can tell the PMS that I carry the coin around with me, and already showed it off to a graduate of Clarkson ROTC. I didn’t even realize…

I worked with a budget Major about once a week on an adjacent post about 15 minutes away.  When I told her I went to my ROTC on R&R leave she started asking questions…. And ?  She was MAJ Kathy Neumann (married, I can’t remember her maiden name) and worked as a Gold-Bar Recruiter from St Lawrence.  I think she graduated in 1997 because she was a year ahead of Tracy Hatch but played on the same field hockey team?  I want to say her name was Geddie?  Small world huh?

He also sent some photos that he has taken while deployed in Afghanistan, and described them in his message… 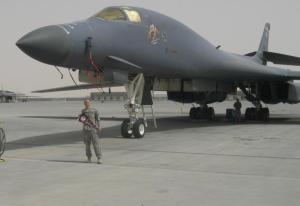 The first pic has a SUNY Potsdam pennant 🙂  in front of a B-1 that flies over Afghanistan.  They said it flew over Afghanistan and can do other University pennants if you send it soon. 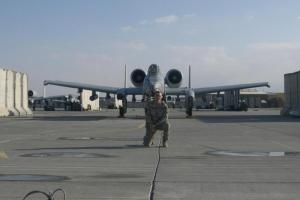 The second pic was when I was the Ground Liaison Officer for the A-10s in Kandahar, Afghanistan.  We told pilots where to go to support Soldiers and Marines from the whole coalition including US, Brits, French, and Dutch.  Pretty cool time there.   I even go to do a marathon there with all the energy bars from the Food Co-op you sent me.  Thanks again!  They were awesome.

The last pic was when the Legends of NHL came to the air base in Kandahar and played against some of the coalition teams on a concrete rink.  They brought the Cup with them and had people take pics in front of it.  I actually bring the penneant around with me now hoping to spot some other cool picture opportunities.

Thanks again for everything. See you soon maybe!!!!

Thanks for your message, Major Rollinson! We appreciate everything you do, and thank you for serving as a U.S. Army Officer!